Wow what a day!

There's A LOT that goes on in 84 miles and 9 hours traveling by bike. So much this is actually going to take table of contents and for your ease of read, these are in the order of importance ( to me that is, I haven't had any of your imput on this ). I'm just taking a rest day tomorrow, so count this as 2 story days I guess.

I headed out this morning and saw that we were close to a full moon, so that means trouble tonight and tomorrow night. Little did I know it would start in my hotel room. I suspect no one will believe me because the pictures didn't quite capture the horror I went through. I checked in, thought all was safe this afternoon at the hotel. Got a quick cool down shower and started to chill out on the bed for a few minutes. Thought I heard a noise, looked around and there were 2 of "them". I can honestly say, I had probably 10 times the adrenal pumping than I did yesterday when the 2 medium dogs tried to take me down with a double team. I leaped into action and all of my martial arts skills just took right over. Just like that, I had my stake in my hand and took both vampires out, just like that. I had no idea I was actually going to be so prepared for this.

Yes 1 on the bed, I hope I can sleep there tonight!! ( I really thought there would be more blood ) 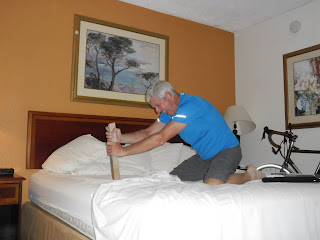 And one on the chair. 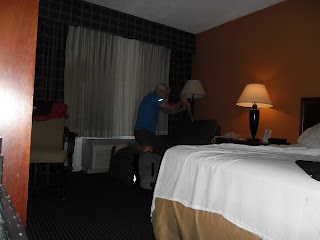 You people are so seriously lucky I had time to set up the camera for this. It's really just too bad the frame snapped right when I slayed them and then they disappeared as if nothing happened. I'll work on the timing a little better if this happens again.

Easily the coolest event of the day was getting east of the Mississippi River ( I'm going to abbreviate that to MSR here on out, fun to type and spell in your head, but too much effort ). Had a little bridge fake before the real bridge. I thought I was going up and onto a feeder bridge system before the MSR, but it was just a train track bridge. This was a completely new road system and bridge and kicked me out on the maps but closer to Baton Rouge (nice!). The maps say catch the fairy, but I didn't see her any where. The cop said "The fairy can't get over the high water right now, take the bridge".

Took me 24 minutes ( with picture stops ) from start of bridge to the last 1/2 mile of bridge over the spill over area ( which was full). Crossing was 9:40am if you are in the pool. Fun pics included at no charge. GPS says 96' climb to the top. 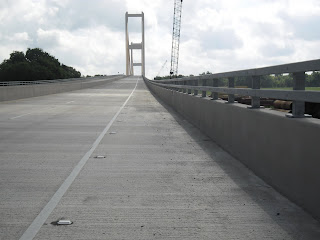 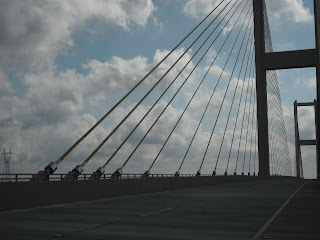 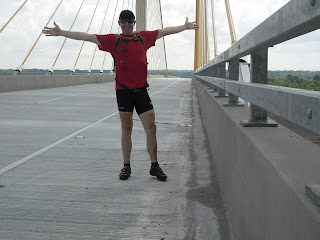 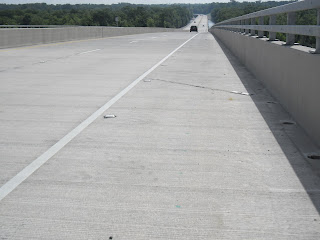 I think Indianapolis is actually trying to be bike friendly, but there's a lot of room for improvement, but Baton Rouge is not even making an attempt ( check that, there was 1 attempt close to campus that I found). But in general, it's 3" of pavement on the right side of the white line before the 4" drop off into the curb. If you find a sidewalk, good luck, it's broken up, full of glass and they didn't quite finish up that national cross walk project (where the put in the red brick with the bumps and handicap accessible ramps at every single cross walk in the USA it seems. Yes I've seen those in the smallest little towns where there wasn't even a side walk and thought..."Really Amy? We put that in for the 5 people in this town of 50 that actually walk instead of get in their big pick up truck?").

Where was I?? Oh yeah, Jack in the Box for lunch. John-"Ebonie, can I ask you a stupid question?". Ebonie-"Sure?". John-"That's the actual "LSU" campus just down the road right?". Ebonie-"Yes, oh my lordie, that's a LONGGG way away from here". (I already knew it was 2 1/2 miles or so) John-"Yeah, but it's just down the that way right". Ebonie-"Yes sir, you might be able to ride that far, I sure can't ( editorial comment....she's like 6'-1" 240ish maybe). How far did you ride to get to Jack in the Box?". John-"Well 4 weeks from San Diego CA I guess is the answer". Ebonie-"WHAT?? Hey girl, this guy rode all the way from San Diego, that's crazy! Can you believe that! Sir, I guess LSU isn't that far away for you". John-"No probably not. Thanks".

I found it just fine and it was a fun little stroll through the campus.
Man I bet it's an awesome time being at a SEC football game here.

Pete Maravich, I thought it would have been Shaq's place. 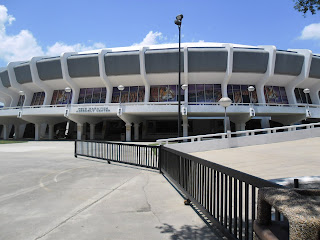 Damn Tiger, that was close. 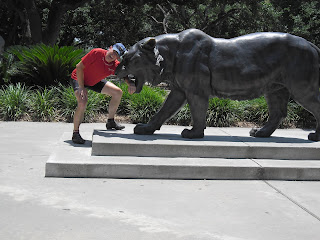 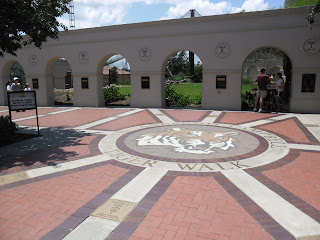 What do tigers do in the afternoon? Get out of the heat and sleep in the shade. 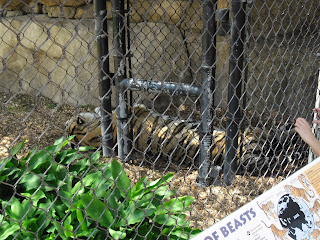 I wonder if the SEC will just move their games to Sunday, if the NFL can't get their s**t together? 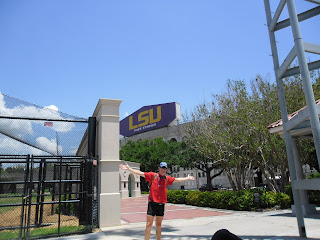 This was easily the highlight of the tour. Ice cold skim milk from the LSU Dairy Bar!! My first skim milk since I left Cindy's 4 weeks ago. Chugged it in like 15 seconds. 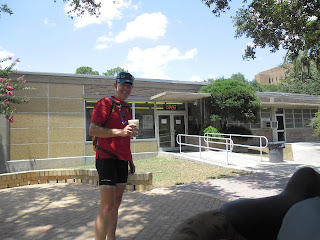 Since you've probably never been here, I bet no one's ever heard of this. Morganza is a little town on the south side of a bend in the MSR. LA route 1 travels right up along side the MSR here. So there's a river, a road about 30 feet up and rail road line and then a 30' drop off. And what they have done is created this mile long bridge, but it's not a bridge under neath, it's lots of different steel walls they can lift open and let water from the MSR go under the road and into the field on the other side. I have no idea why they would do that, but one of the walls was open and the water was going into the other side of the road. I hope no one lives over there, can't be good. I know you won't believe me, but I did get some good pictures of this. 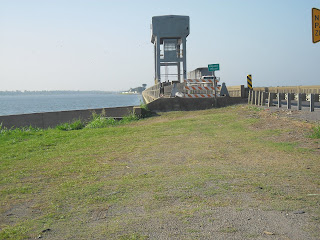 The big long bridge, that's not a bridge, but a road over a special dam. 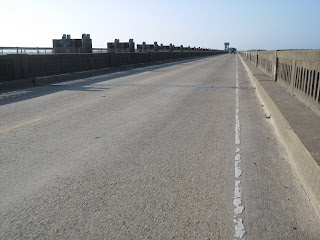 White water and birds, I know what that means..... 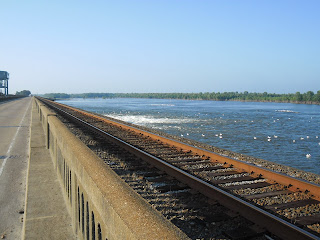 Where's the little fishy? Pop these 2 shots up for a closer look to find the fish jumping and hoping the birds don't get them. Silly fish, you can't jump back to the other side. 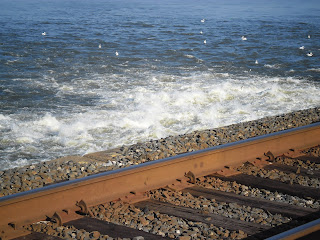 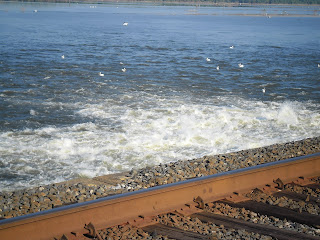 Right before the sherrif stopped and told me to keep moving, no stopping. John-"Really, I was just trying to be safe and let the traffic pass by, everyone here drives like an a**hole and doesn't give me any room". ( OK I was thinking that last part all day long, but didn't tell him that). 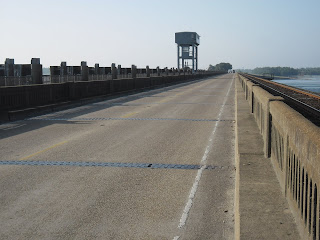 Ohhhhh.. nevermind, maybe you all have heard of this place...
Thanks CNN!! 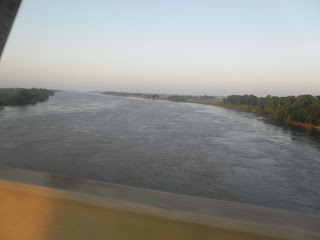 Seriously, bears! I have to watch out for bears now. 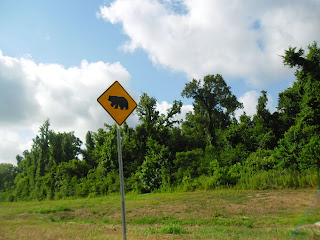 You know how to tell when a train has gone by? It left its tracks :) 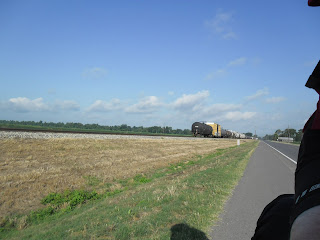 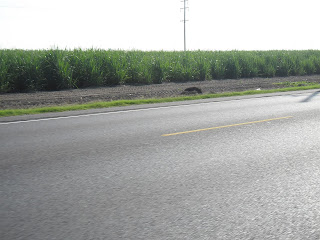 Still having too much fun obviously!