Spectactular Scenery ( but HELL on bike )

Silver City to Cabollo Lake New Mexico was just spectacular in every way. First, I am so glad Aaron and Aleena were riding along with me today, they could have moved along much faster than me, but were nice enough to rest long enough at stops to let me catch up. The 1 picture they were on the switchback up top yelling down to me was pretty fun.

The hell part is simple, 7 hours of climb for 30 minute decent. The climb was insane and 5 of the 18 miles were probably walking as there was no way these legs could ride up that mountain with the 50 pounds of gear, water, food and everything else you have to carry because you don't know if there's any supplies on the other side. Also had a 4 mile detour to circle back for food and water since 3 of the places that were supposed to be there, weren't. Anyway, check the Garmin charts for the pain. Min speed walking 3 MPH, max speed flying downhill 33MPH and I that was holding back as to not fly off the mountain. The road was basically small rock and tar, I swear to god my tires were sticking to the road and the surface was so rough, I think it took twice as much effort to pedal all day.

Enough of that, the beauty of the day was obviously the scenery. The first 22 miles from Silver City to the base of the Mimbres Mountains was large ups and downs. Went past a massive mining operation, actually if you Google map Hanover New Mexico and hit the satellite view you'll see how impressive this is.

Resources were pretty bad and the maps were off a little on where we needed to go, so had to double back to get fueled up. The climb was 2 big climbs, the first on the west side of the mountain had vegetation, but was very dry and rocky. I could pedal 3-4 of the miles, but when the grade gets into the 5-6%, no way. So walk away.

The middle of the climb started to get into the east side of the mountain and the tall pines and other big trees started showing up. The road was very winding with ups and downs, but generally the same elevation. Then at the "bottom" of the middle section was a creek basin where the creek and road were at and the rocks shot up 400-500 feet straight up around us. Very cool!!

Then the next climb up was all winding around the creek and trees with switchback after switch back. It was around mile 53 and I was already spent, so my hike with 70 pounds of bike was probably 4 miles and 2 hours up that section. I did NOT hesitate when a pick up stopped and said throw it in we'll take you the last 3/4 mile. Thank you adrenalin for the extra boost to lift the 70 pound bike into back!!

Emory Pass was about a 15 mile view, I'm sure on a clear day it would have been 25-30. All day long I noticed 5-6 different Audi's passing me from both directions. All blacked out and all "secretive" looking. The decent on the road made it clear that route was a perfect test ground and I'm fairly sure that's what they were doing going up and down and through these mountains. It was 3000 foot decent in 10 miles, 10MPH u turns, fall off the side of the road and never be seen again kind of road.

Then it was leave the 2 wolves behind and suck it up another 25 miles. With 90% of the work downhill and down wind, it was good speeds to Caballo Lake NM. Found a great RV Park that had a campsite, got all setup to camp out and walked around and found 2 little cabins on the lot. Yes, I moved all my stuff and put away the tent and slept in an air conditioned cabin. Man that was 3 long days of climbing mountains!!


Just a random picture from the day before my wolf pack took. 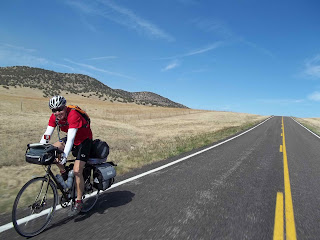 Starting off the day headed east. 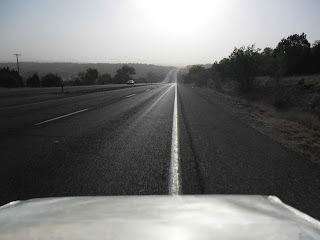 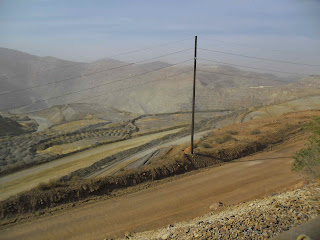 Free fall down the mountain before the next mountain. 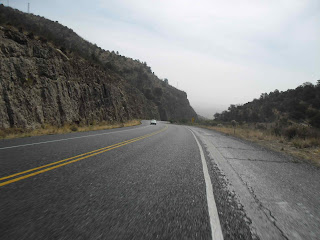 Climb, climb, climb. ( I'm sure they got a picture of me walking.) 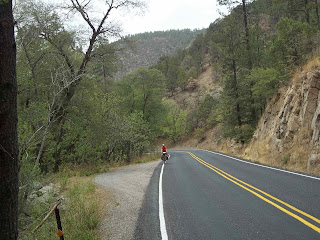 Aaron and Aleena thanks for carrying me 3 days!! 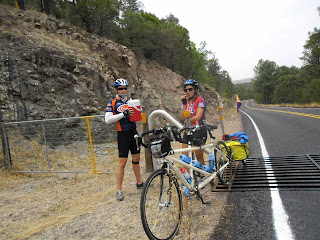 Half way into big climb. 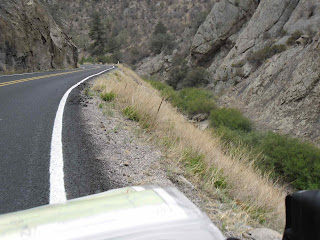 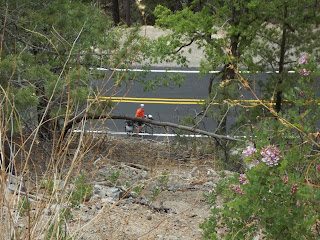 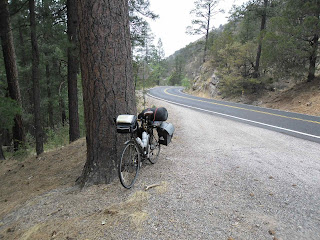 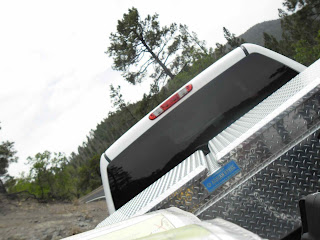 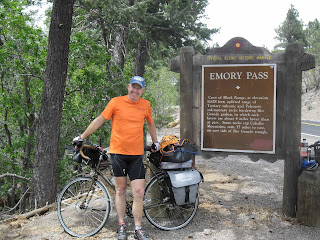 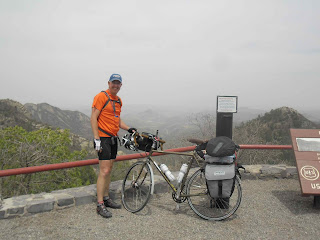 That's the road hugging the mountain in the back ground there. 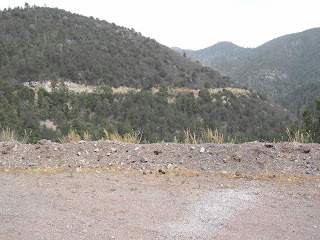 I was wondering why so many cow pies in the road, now I understand the cattle guards. 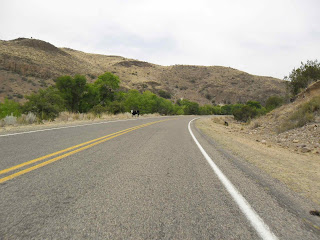 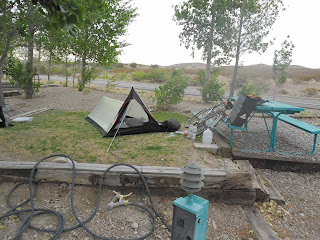 Forget that!!! I'm moving on up to my little cabin for the night. 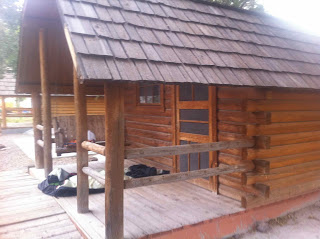