After yesterday's longer day, left a little later around 7:15 because we're back to shorter 65-70 mile rides again. Well we still got a long day involved. Some of it was the rain, some of it was messing around cause we had short miles, but it was all fun.

Left the hotel and with in 1/4 mile I had an almost flat tire. Pumped it back up to as much as I could to 60 pounds or so and caught back up with A&A (that's what I shall call Aleena and Aaron here on out). Since they took off in the lead, the back guy with problems has to catch up. I've done it to them too. Used Aaron's "real pump" ( which I now have one of my own ) and tire held out, so I am still only at 2 flats.

Quick 11 miles or so and a bridge and we were in Florida. All of the morning ride was your classic southeast sea shore ride. Big condo building, surf shop, condo, competitor surf shop, hotel, surf shop ( same one on 3 different corners on 1 intersection), sea food restaurant, condo, repeat... Lots of buses too along the way. I think they take all the AL tourist to the Biloxi casinos for the day. Lots of walkers and runners, I believe I gave all of them a "smile and good morning" breezing by them. Quite a few "On your left" with the occassional "on your right" to the apparent left handers who don't know which side of the road to walk on. Great pavement and great bike lanes for almost every mile today. Thanks AL and FL!

The hardest physical part of the day was pushing the bike to the Gulf of Mexico through the beautiful white sands of coast. It was 100 yards away ( ok felt like that, probably closer to 30-35 yards ), and it was tough, but worth the effort. Then started winding ourselves in to Pensacola. Should a stopped for drinks, but missed it so rode an extra 7 miles. Part of that past the Navy Flight training ( Blue Angels base). Stopepd at C-store and met (we thinks) a father/son from Connecticut who flew to Tallahasee and are headed west. Asked what it was like out there. That's the second west riders for me..... the answer is "what? good luck!!". It's a delicate balance to encourage and properly warn people of the heat, the lack of water, the heat, the mountains, the roads, and everything else I said the first 2 weeks. All you can do is say, good luck, be prepared.

Off through Pensacola, quick bike shop stop for tubes, mirror and a different pump for me. Mirror broke off in NOLA ( that will probably save my life more times than my helmet), pump ( already noted the one I have is way too much effort), tubes ( well.. this pack goes through them). Stopped in down town at the Fish House. Awesome warf type restaurant. I had to ask if we were dressed OK, lots of business lunches going on. We were, but probably smelled worse than the fresh seafood. Watched the storms roll in on the radar while we ate and hoped we'd just be riding along the backend and not get wet. No go... it's popup season and the T-storms just pop-up. Got about 3 miles into after lunch ride and had to find an awning for 20 minutes in from of a bar. Took of, made it a mile and had some close lightning, so hung out another 45 minutes in from of gas station.

Cleared off, temps on GPS went from 110 to 79! took off through north Pensacola along a lake where there are serious rolling hills. So a little up and down ( climbed 1000+ feet again today) and fun views along the way. 16 miles into Pace FL and it was Sonic Happy Hour. Slushies and drinks half price, where's Red Bull Vodka Ben when you need him!!! Wrapped it up with a 12 miler to Al and Sally Melvins house in Milton FL. They are a warmshowers.org house and a great place to stop.

Al is a helicopter pilot ( the only 2 helicopter pilots I met were on this trip!!). Al flew in Vietnam on a real helicopter, with real missiles, real guns, and real bullets. There's a hero! Al was an Air Traffic controller in various places (Alaska and West Virginia). Al started flying again and flew for Exxon and then flew for Florida fire fighting crew dropping 3500 pounds of water ( the bucket gets filled in 20 seconds and he has to keep the helicopter flying while that happens) on forest fires. Al did a round trip bike ride along the Florida Atlantic coast (Jacksonville to Key West and back essentially). He can't ride anymore, so he invites riders to his house.... awesome!!

Sally is a mom ( and Grand mother now of 3 year old twin boys in Maine), she's a second grade teacher, she's a Canadian ( born and raise in Loring Canada, google map that one!!) and her parents owned an isolated resort in the wilderness that was a summer vacation spot for many Americans, and she's now a writer ( just completing her 4th book in 3 years). Two of them are on Amazon, and her name is Sylvia Melvin. Come on look them up they are only $1.99!! One's a story loosely tired to the resort she grew up on, one's a biographpy on her grandmother who gave birth to her 5th child the day her husband was buried, and the is a biography on Al's uncle who was a Florida State Appellate Judge. Oh, and Sally cooks pretty good too, had a great home cooked meal on a real kitchen table tonight!

Off to bed and off to Defuniak Springs FL tomorrow. 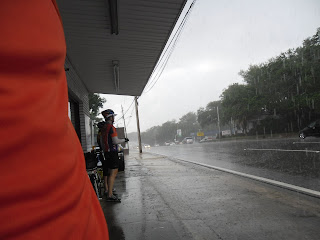 This is how I walk around now, with my hands on my pants holding them up! ( 13-14 pounds lighter right now) 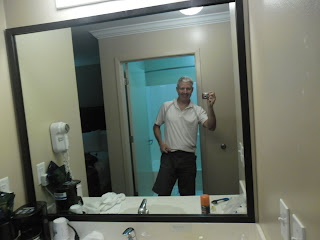 Dual personality bar at the line. 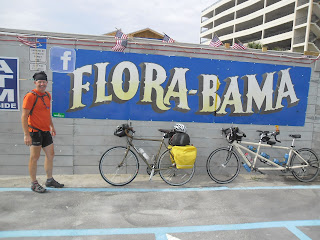 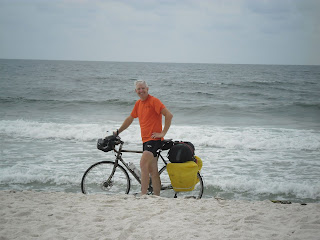 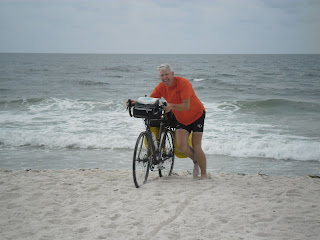 I forgot how nice the Gulf beaches are. 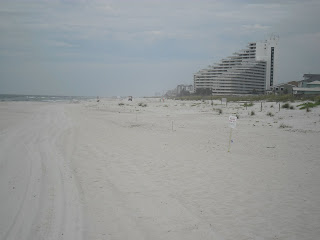 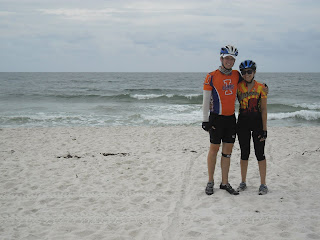 Unloading and taking off shoes for photo op. ( I'm not a sand guy) 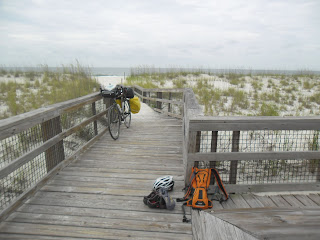 Headed away from the Gulf. 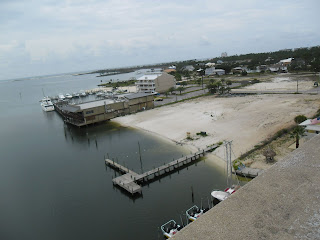 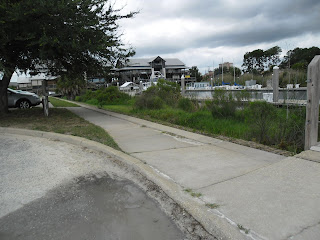 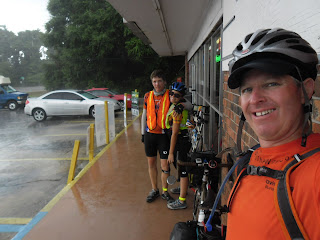 Interstate 10 headed east over the lake on north side of Pensacola. 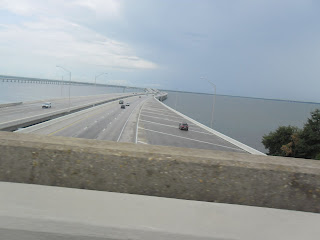 Very unusual homes on the North side of Pensacola. Someone actually had to draw this stuff out on paper. Can you imagine the Architect at that meeting?? Wait, let me get this straight, you want what? Let me see if I can draw that. Like this? No, I only want 1 point roof like a steeple. 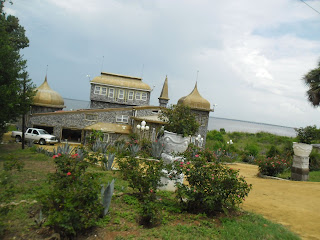 but honey... why are we putting a stupid pink tree house in the yard, it doesn't match. OK dear, I guess it matches close enough. 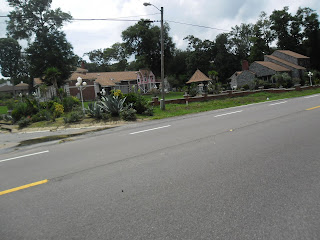 Best I could get of Armadillo road kill that wasn't completely squished. 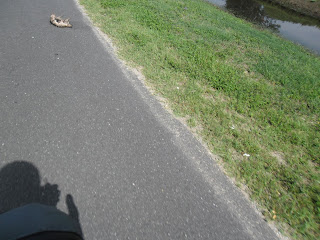 I passed him going up the last hill ! (Damn right I did) 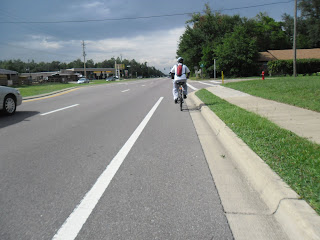 Author Sylvia Melvin's work. (I'm staying at her house and I honestly told her I didn't read :). I think she's OK with that. 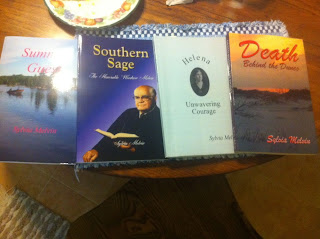 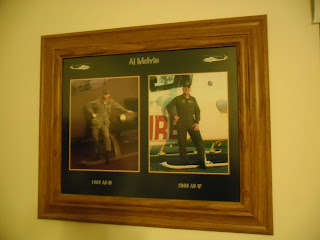 Al and Sally with their grand kids. 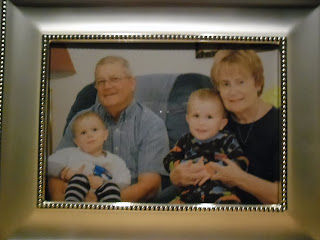 My king size bed in the Living room tonight, Thanks Al and Sally. 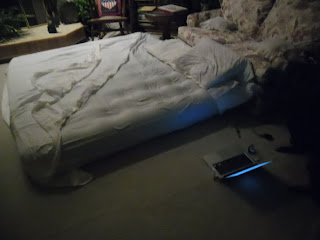