Today I took a train ride on the Amtrak. It was a good opportunity to take what I learned from the first 2 weeks of travel and make sure I was doing the best thing I could to take care of myself. So this was a "make adjustments" day by cutting off 1 map from El Paso TX, to Del Rio TX. Fortunately, the conductor allowed my to store my bike in baggage ( oddly enough it was his call this morning to do that because I'm not traveling the "normal" way). Even more oddly enough, there was no reason not to let me do it. The door onto the train was right next to the compartment of storage with NOTHING in it! So I am spending 9 hours on a train and cutting off 430 miles of even more nothingness.

So what I really didn't know was how much slower and more challenging it was going to be with the 40-50 lbs. of weight. Turns out 3-4 hours a day! That's fine, but it has started to interfere with me having enough energy to ride, work and still have fun doing this. That's why this quick little train ride ( which I've never done, may never do again ) is a huge help. It leaves me with 4 weeks and 4 maps. I can now average 65-75 miles a day and I should be able to get myself out of the heat by 2:00 in the afternoon now. It's also skipping an incredibly difficult Map 3, which for the record I never liked from the day I saw it. The train, for the most part, is taking the same route as the bike. It's very pretty and great through west Texas, but the parts where you have no services for 120 miles and are warned "be prepared to sleep on the side of the road" I am not going to miss or regret missing on the bike. There are 3 places on my maps that say "no services for 50 miles, be prepared". I still have 1600 miles to go and I know this will end up being a great decision in the big picture.

My seat mate today is Luther. Luther is a 68 year African American born in Mississippi. I have about a 1 second delay with British accents, but this ride has eclipsed that. I'm exhausted trying to interpret what ever he's saying and I already have a head ache 2 hours in. Overall, Luther does deserve the respect I'm trying to give him. He's a Vietnam Vet and done Firefighting and Criminal Justice work over the years. He's telling me stories about Rodney King that's his neighbor ( LA police beating ), how he couldn't bring his revolver on the train, how he thinks OJ didn't do it, and oh yeah, how we didn't really go to the moon. He sounds pretty sure of that one. He's got his spit cup and just flashed me a picture of his daughter's brand new Mercedes 300. I can't keep up, my head's exploding. He keeps trying to make some kind of sense of how or why I would ride a bike across the country. Said they were all talking about "that guy getting on the train with a bike" when they picked me up in El Paso. Luther literally talked the entire time I was sitting next ti him.

I'm spending most of my time in the "Sun Room", see pictures below. It's a common area for the passengers and actually pretty nice place to hang out. The land scape is the same as southeast New Mexico, and as we left El Paso, there were another 25 miles or so of Pecan groves. Climbed in to some mountain ranges and back down as the rest of the day went along. Very desolate as advertised. Passed through Marfa Texas where we made an unscheduled stop. Had to place a passenger in the Sheriff's hands for some reason. The "Sun Room" for most of the trip, its giving me less of a head ache. However, the people are equally unusual. I've got a single mom who's just ragging on her 2 teenage boys all afternoon to study and stop picking on each other ( wait, it's Saturday right? we're on a train right?) Pretty much like any teenagers, they are blowing her off and fake studying. I've got BIG MOUTH Marge who is SCREAMING INTO THE CELL PHONE for a simple conversation and laughing as loud as any human possibly can when someone says something to her. I've got 2 guys with an accent ( Australian I thinks ) who keep telling dirty jokes ( yes there are kids around ). I'm leaving some of details out because I'm getting a little mean. On a positive note, though, there are 25 people or so from El Paso that are headed to New Orleans to help clean up from Hurricane Katrina ( wow, there's still people helping out there) or recent tornados ( they may get re-directed once there). I took pictures of them in the station and I've been rewarded with all the chocolate chip cookies and brownies I wanted. As I got off the train, 1 of them who had been feeding me the goodies all day came off the train and wished me safe travels. Again, less of a headache in the Sun Room. But for the record, the people in the coach where my seat is have been there for 2 days now, the place looks like a war room and stinks to holly hell. Advice time….if you do a cross country train ride, whatever you do go first class.

I do have next week all planned out now, 65-75 mile rides ARE going to be more manageable. As entertaining AND miserable as this train ride was, I'm glad I did it and glad it's over.

OK this was a week's worth of biking, so couple extra pics tonight. 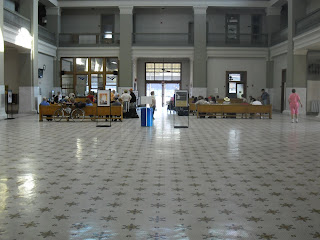 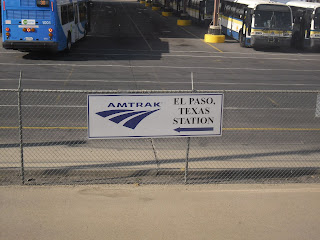 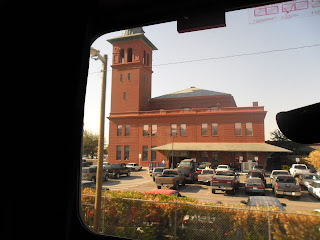 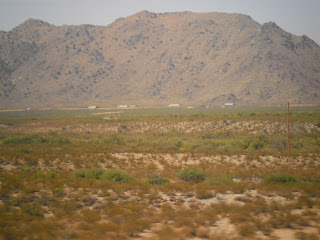 Just the typical scenery for 400 miles. 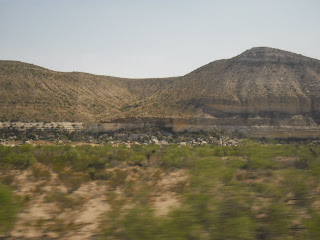 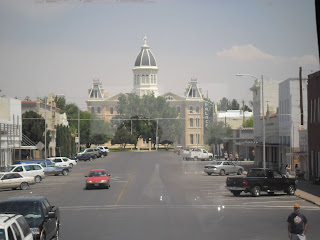 We don't know exactly what he did, but 1) he created an unscheduled stop, 2) the dining car where they held him for 30 minutes was shut down for lunch, 3) everyone took pictures of him as the train pulled away, and 4) he's stuck in Marfa TX at this point. 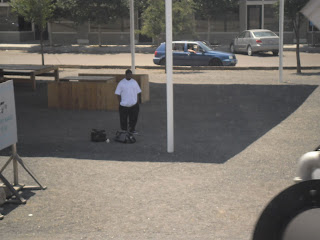 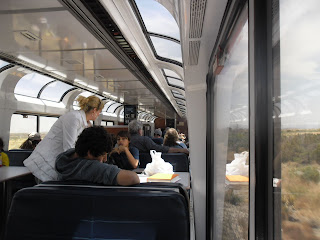 OK, I had an artistic moment in the middle where I was getting bored. 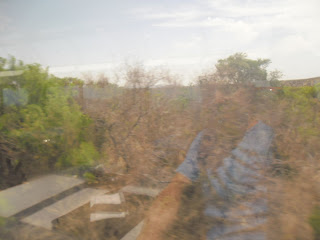 Highest US bridge crossing at 275 feet! 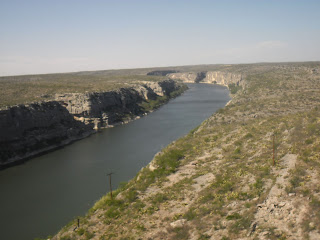 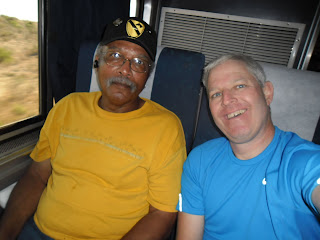 The Bridge I would have ridden. 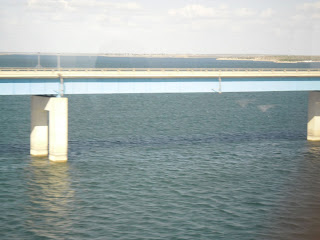 All depart who needs to depart!!! 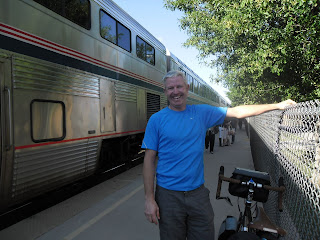