Hanging out in Navasota TX today a the Comfort Inn and Suites. Over on the east side of town on the by-pass. There's a couple travel baseball teams in the hotel, so of course I'm reminded of the fun times of travel soccer we had. Playing baseball down here in the heat ( or having to watch that ) has to be tough. 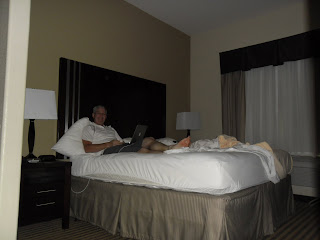 I've got next week planned out. should be getting out of TX on Tuesday and then most of the way through Louisiana by Friday. The route's a little longer though, as it winds through the back country. Got a couple hotels called and all set for rooms in "little town motels" this week. Also looks like the weather is going to lighten up some, 94-95 for the highs. Low winds and cloud cover help a lot, so as far as I'm concerned the days probably won't be as unbearable through the week. Can't believe I'm finally seeing some 10% chance of rain though, so I get to actually think that rain covers might get used. Not a single drop of rain the past 3 weeks.

For rest day... Here's some things I've learned so far:

- Planning is how you survive. Having an exact plan for the route, the liquids and the surroundings is imperative.

- Lizards can run faster than me going up hill.

- Going down mountains is so much fun. The speed, the wind in your face and the awe of what's around is awesome.

- Little dogs think they can catch me on a bike. I laugh in their face. They may scare me cause I didn't see them coming, but no match with J-dog. I ride right past them.

- Most people respect bicyclists. Some don't. Do get over in an open lane or hug the yellow line.

- I can be in the most desolate area and not see a car for an hour, but somehow, there will always end up being me and 2 passing cars in the same place of the road at the same time. I don't get how that can happen.

- Those big truck commercials during football season... they are for Arizona, New Mexico, and Texas. HUGE pickup trucks out here all over the place.

- It's so rewarding to push yourself to do something that you don't know if you can do. Don't be afraid to surprise yourself with success or failure, they both make you a better person.

- All my gadgets are great. The phone ( google maps when I need them ), Garmin ( awesome tracking ), camera ( look for a metal not plastic connector to a tripod ), macbook air ( enough said).

- Cows always watch you go by. Horses mostly do.

- I have a great bike with really good tires.

- People are great. It doesn't really take much to help somebody out just a little, but it will probably mean a lot (and more than you think) to that person.

- Everyone I know is great. Thanks for all the support.

- Its really is cool to see the country instead of flying over it.

- There are Water and Ice machines out west along the road side in little 10 by 20 sheds. That's how people get water in some places.

- Our country figures out how to do things in the most impossible and improbable places.