Metro Phoenix is about 70 miles long. I pretty much went tip to tip today (just about 15 of the last ones tomorrow morning to go). Except for a 9 mile bike path, it was all city street riding, and 25 MPH winds, and I did it 11AM-5:30PM (yep in the hottest part of the day). Actually that was the easy part. My 11 mile an hour speeds didn't really line up with the traffic light flow, so it was stop and go all day long, probably every other major intersection was a stop. There's a lot of space in this part of the US so they make big intersections and that means longer lights. Oh cool, watching the local weather, it was 100, but no where near the record high 112.

Anyway, I'm glad I made to the other side, it's pretty dangerous making sure no one turns right into you and no one coming off a side street comes into you. No close calls though. I'm kicking myself though, I had 2 great cheat opportunities, 1 was a train and the other a bus, I could have easily knocked of 10-20 miles and it didn't even dawn on me to do that. Tomorrow I pay for that with a 2,000 foot climb that's 15 miles longer than it needed to be. 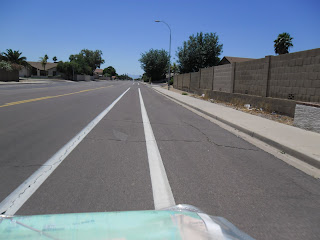 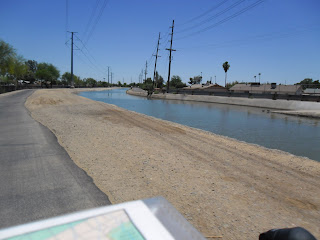 A City "Dip" (as opposed to previously reported Desert Dip). Same affect, race down under the street and pedal hard to get up the other side. (SUCKS!!) 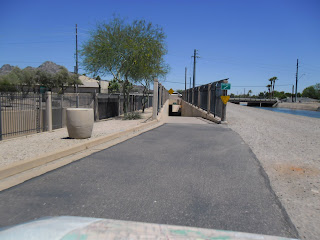 I could hear it saying "stop its too hot, put me away". 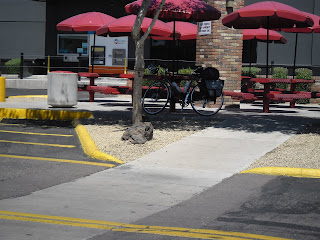 Little kid that passed me ( he's not gone 400 miles though!) 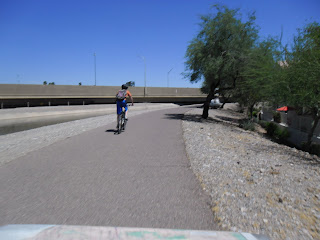 Person I PASSED. (true they were in a school zone I dis-obeyed, but it counts I beat them to the cross walk by a nose) 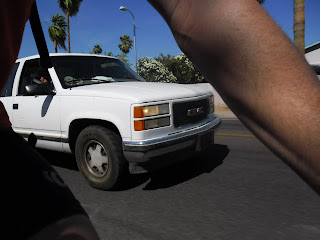 Sun Devil Stadium and the end of Map Set #1!!! ( for those of you in the pool, sorry change of venue and no pissing and moaning! Official Time May 26 4:13PM ) 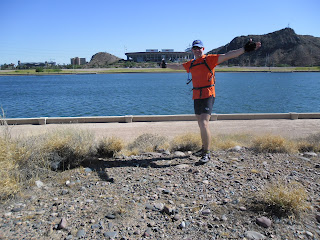