OMG what am I doing!!

Well that day was mostly what I expected, a very challenging up hill ride. For starters, I'm staying at my sister's one more night. So, I didn't carry any weight today. The first 20 miles or so were fairly level climb out of San Diego and then it was for the most part a constant grind up the mountains. I really pushed it to to the top so I didn't have to lug the weight tomorrow as much. I did have to walk twice as it was just too much hill and I was cramping up some.

Went from the ocean through a nice bike path, past Charge Stadium, and through a Gorge. Went into the Gorge with cloudy sky and came out the other side to heat and sunshine. Wound through the outskirt suburbs of San Diego and then pretty much out into the country. Had my first Jack in the Box fast food. Surprise, tasted like all the rest. Apline had a very hectic cop day, I think they had 50 cops and a couple helicopters stopping anyone looking like they had drugs. That was half way up the hill and Tim dropped out for the day there. I continued along Interstate 8 and then eventually was on the I-8 for 3 miles or so. 3 lane traffic and a nice clean side was great but the 200 yard bridge crossing the 300 foot or so below river was a bit scary, check that, a lot scary. I moved as far left as I could. Then 1 more big climb and a fun 25MPH downhill run to finish up in Pine Valley CA. Perfect ending to the day, the Frosty Burger for a Chocolate Shake.

All and all not too bad. I'm about 20 miles off pace now so got a little catching up to do ( or slacking off some ) to try and get back to the planned cities and stops. Probably won't cause too much of a problem though. El Centro CA tomorrow 75 miles.

Dipping the tires in the Pacific Ocean 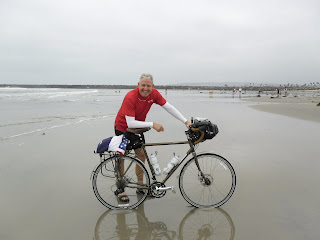 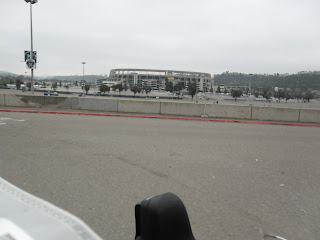 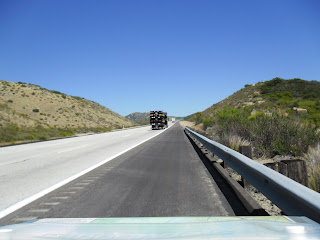 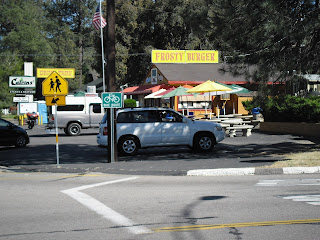