I'll get to Guy in just a bit, he was later in the day, but the highlight of the day.

Kicked off the day around 6:00 and had my first mechanical issue to figure out. 2 minutes fix, but only after 20 minutes of unloading gear and pondering the situation. Front Derailleur had loosened up and needed twisted back in line and a bolt tightend back down. Easy fix for the pro, the novice just needed a little more time to problem solve it.

Slowed me enough so that 10 minutes later, Brandon was there to meet up. Seemed like a great idea, I wasn't too sure how the day was going to go. Brandon is 24, laid off from his San Diego job and riding back home to Ohio. He'd gotten to Phoenix and had taken a month off but was starting back up today on his brand new Walmart "hybrid" bike. Looked like the right bike to use and had a trailer behind it for gear and 10lbs of back pack. Tennis shoes, no socks, swim suit and I'm sure the bike wasn't fitted well. 150lbs wet maybe, no money, just desire and food stamps. Actually it pepped me up a little cause I wasn't really looking forward to the ride. That was good for 25 miles or so and until the first big climb. I thought he was going to overheat ( may have been the monster drinks and the "suedo c-store pot" he was smoking).

For me, I learned how to hitchhike today. I actually stuck my thumb out and got us a ride in the back of a pick up truck for 7 miles. The sucky part was we were almost to the top of the hill and had a coast down to town. What a great guy ( not Guy, he's later), didn't take any cash, just said your welcome, I'd hope someone would help me too.

Cooled down at the town rest area, grabbed some lunch and then John White went into action hunting for the next ride up the 11 mile 1500 foot climb I did NOT want to do. Carefully watching trucks coming into the rest area and the direction they were headed ( this wasn't an interstate rest area so people came in from both directions). Struck out 4 times!! No problem, lets meander over to the gas station, c-store. James out back smoking. John "Hey you know any one with a truck that would want $20"?. James - "Nope, but ask any one around here we're all pretty nice people". John-"cool, I'll grab some water inside and keep looking". Inside checking out and James is back in. Liar, he did know someone, the owner of the store standing next to me. It's 88 year old Guy. Lady behind the counter "Go on Guy, go home and get your pickup truck and help these gentleman out!".

Guy-"OK, I'll be right back". Turns out Guy was 88 years old, moved to town and bought the gas station in 1960! Lived in Owensburg KY on tobacco farm growing up. Lost his dad one day on an oil rig accident (got pulled out of school at 10:41 with that news). Came into Superior AZ on the old road ( which he pointed out along the ride up to the top, we stopped 3 times as part of the guided tour). And here's the best part. Superior and Miami AZ is separated by 17 miles of a gorgeous, treacherous pass, including a tunnel through the mountain. He showed us the mule train trail that was used in the 50's and 60's to truck prostitutes ( Guy used the "W" word, also said some of them were "hot" ) between the 2 mining towns. Payday was every other Friday, alternating between the towns. So the prostitutes would ride back and forth every Thursday on mules to help the gentlemen out of their earnings, and pants, if I've interpreted this story correctly.

Anyway, it was a Happy Trail today but tough days ahead, I may actually have to camp here soon.


Brandon takes over the lead so I can catch a breath ( open that image up to check out his gear, I don't know how he'll make it ). 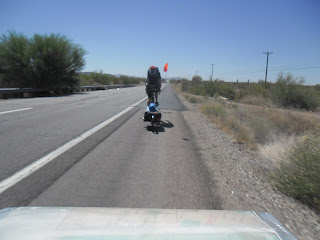 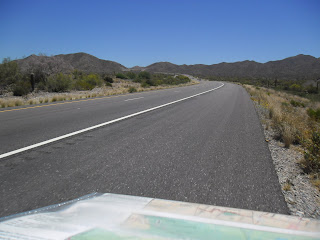 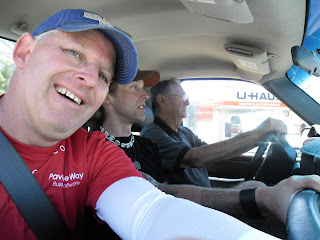 Tunnel, not fun on a bike, heavy weekend truck, boat and car traffic. 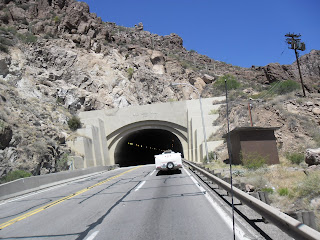 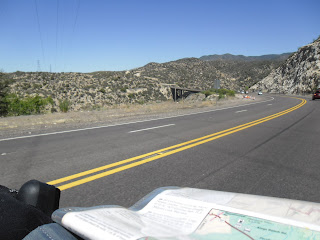 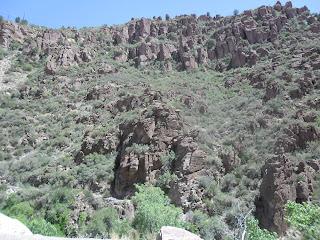 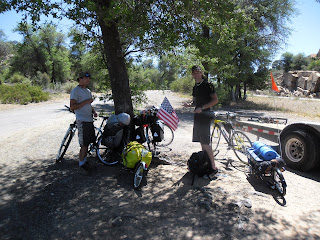 
Come on now, hit the the "View Details" link to check out the 65 mile an hour speed. anything under 35 was me going down hill.